When it comes to the Super Bowl, you never know what you’re going to get. Some Super Bowls are tedious events where everyone just seems to be going through the motions before arriving at a virtually predetermined conclusion. But other games are back-and-forth battles where the momentum keeps shifting from one team to the other.

Still other games are primarily remembered for just one extraordinary moment that becomes a mainstay on highlight reels for years afterward. And, finally, you have games that may not have had particularly thrilling on-the-field play but achieved huge historical significance.

Here’s a look at those Super Bowl games that can be said to have attained iconic status. 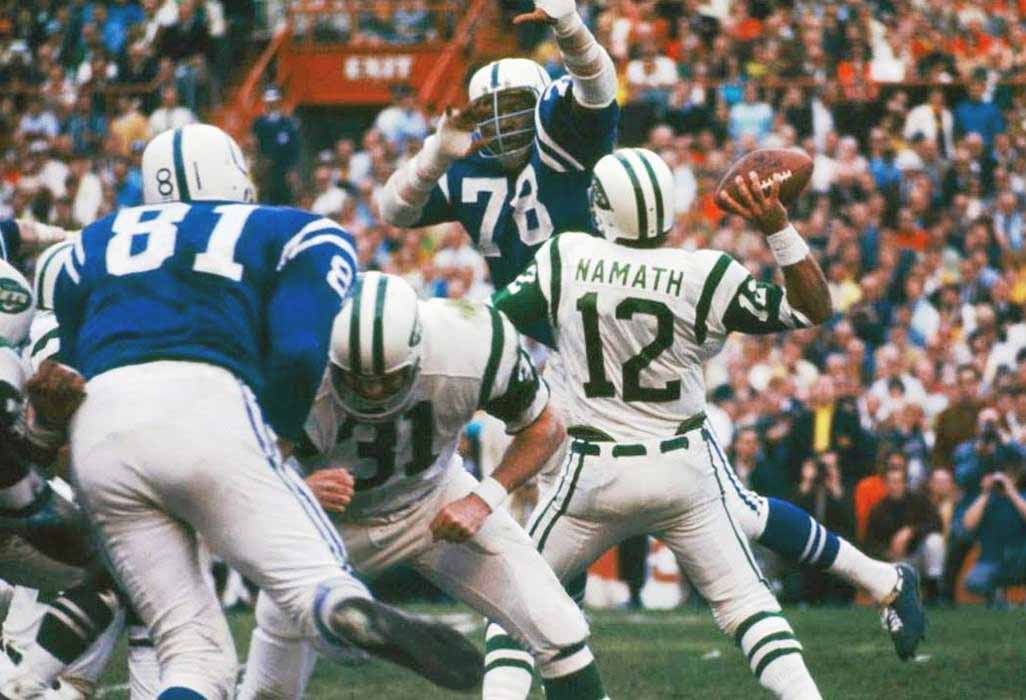 The third Super Bowl—actually the first to be officially called by that name, as the first two were technically “the AFL-NFL World Championship Game”—literally changed the history of pro football.

In the era prior to the formal merger of the two leagues in 1970, it was considered common knowledge that the NFL was vastly superior to the AFL, to the extent that many people questioned the wisdom of merging such obviously unequal entities at all. The routs of Super Bowls I and II only reinforced that notion. The NFL’s Green Bay Packers demolished the Chiefs by 25 points in the first contest and the Raiders by 19 points in the second.

On the eve of Super Bowl III, there was little reason to expect the game to turn out much differently than I and II. The NFL was represented by the Baltimore Colts, who had a 13-1 regular-season record and had just smashed the Cleveland Browns 34-0 in the NFL Championship Game.

The AFL, on the other hand, was represented by the New York Jets, a historically mediocre team led by a bigmouthed quarterback named Joe Namath. Much to everyone’s amusement, Namath had even told the Thursday-night crowd at the Miami Touchdown Club, “We're gonna win the game. I guarantee it.”

No one believed him. Shortly before Super Bowl III, Atlanta Falcons head coach Norm Van Brocklin dismissively said of the cocky Jets QB, “I'll tell you what I think about Joe Namath on Sunday night—after he has played his first pro game.”1

Namath’s “first pro game” ended in a convincing 16-7 Jets victory where the Colts failed to score until the fourth quarter. The victory turned Namath into a pop culture celebrity and (briefly) a TV and movie star. More importantly, the game permanently dispelled any notions that those upstart AFL teams couldn’t compete in the big leagues. And the image of Namath trotting off the field with his index finger raised in triumph remains one of the iconic images in NFL history. 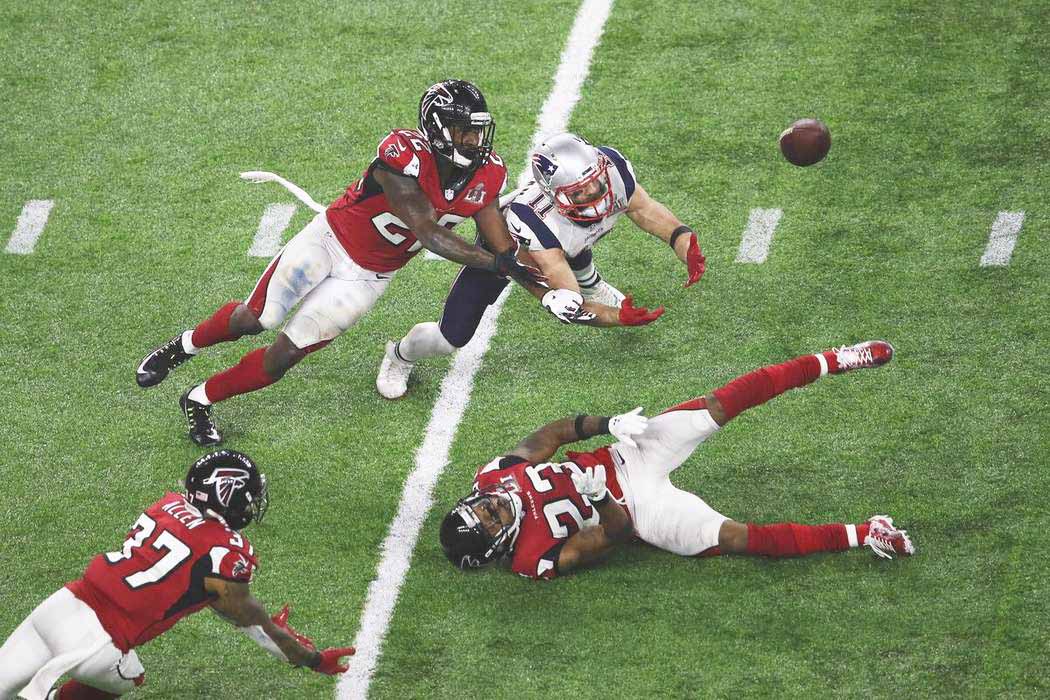 It’s one thing to win a Super Bowl, but managing to capture that Vince Lombardi Trophy by coming back from a 25-point deficit is the sort of achievement that legends are made of. That’s exactly what Tom Brady’s Patriots did in Super Bowl 51.

You could say that it’s too early to claim that the Patriots’ performance has achieved iconic status, but it’s pretty certain that people will be talking about this game as long as pro football is played. What the Patriots pulled off here is a testimonial not only to Brady’s leadership skills but also to the importance of having a never-die spirit. LI also made history as the first Super Bowl to go into overtime.

Incidentally, Falcons wide receiver Mohamed Sanu later blamed the lengthy Super Bowl halftime show for killing his team's momentum. It’s an interesting theory—those shows do tend to go on and on. Did Lady Gaga effectively turn the tide in the Patriots’ favor? It seems more likely, though, that the Falcons simply ran into an irresistible force led by one of the all-time best quarterbacks.2

This was another exciting hard-fought battle that wasn’t decided until the very last play, when the Steelers' Glen Edwards intercepted a Roger Staubach pass in the end zone. However, MVP honors ended up going to Lynn Swann for making exactly four pass receptions in the game. That’s not a unique achievement in itself—in fact, Fred Biletnikoff was named Super Bowl MVP the very next year for a four-catch performance in Super Bowl XI.

But what is remarkable about Swann’s performance is that two of his four receptions are among the most incredible catches in NFL history. And he did it while recovering from a concussion that nearly forced him to miss the game altogether!

Swann’s first catch of the night was a remarkable 32-yarder along the right sideline where he artfully managed to keep his feet inbounds. But that wasn’t the most impressive catch of the night. That honor belongs to Swann’s second reception of the game, which occurred in the final minutes before halftime.

That’s when QB Terry Bradshaw, dropping back to the Cowboys’ goal line, threw a bomb to Swann, who was being covered by cornerback Mark Washington. You’ve probably seen what happened next: Swann leapt for the ball, bobbled it on his fingertips, kept his eyes on it as the ball and himself began to fall to the turf, and grabbed it just before his horizontal body hit the Earth.

If anybody else but Lynn Swann had been out there, it would have been an incomplete pass; instead, it went into the record books as a 53-yard reception. The catch alone is the sort of effort that turns players into legends.

And that's not all: Swann also made a 64-yard TD reception in the 4th quarter. In all, Swann's 161 receiving yards for the night set a new Super Bowl record (currently owned by Jerry Rice). It also solidified his place in football history. He was inducted into the Football Hall of Fame in 2001.3,4,5,6 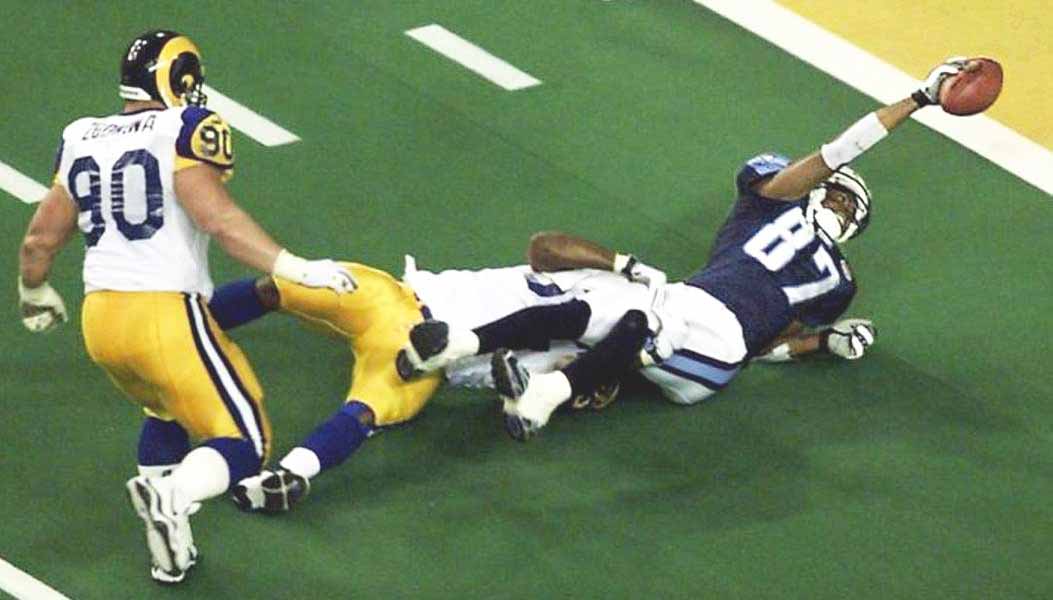 Super Bowl 34 was a real thrill-fest that saw the St. Louis Rams fritter away a 16-point lead before scoring a go-ahead touchdown with just under two minutes left on the clock. That winning score—a 73-yard touchdown pass from Kurt Warner to Isaac Bruce—is one of the most legendary plays in Super Bowl history. But as remarkable as that play is, it isn’t what people remember most about Super Bowl XXXIV. No, what they remember is the incident they call “The Tackle.”

With six seconds left, the Titans had the ball on the Rams' 10-yard line. That's when QB Steve McNair threw a dart at Kevin Dyson, who caught the ball at around the 4-yard line and turned to charge into the end zone. Rams linebacker Mike Jones wrapped his arms around Dyson’s lower body and pulled him to the turf as the wide receiver tried to reach across the goal line with the ball in his right hand. He just barely came short. It’s an amazing moment that fans will probably be seeing over and over again for years to come.7

Our look at the top Super Bowl games of all time isn’t necessarily definitive. There is certainly no shortage of games that can be said to have become iconic. Other strong candidates include Super Bowl XLII (2008), with the infamous "helmet catch"; and the thrilling Steelers-Cowboys rematch in Super Bowl XIII (1979).

What we can say with confidence is that we have the best NFL throwback jerseys you'll find on the internet. Please feel free to check out our huge online catalog for authentic, historically accurate jerseys recognizing the extraordinary careers of the finest players ever to set foot on the gridiron.