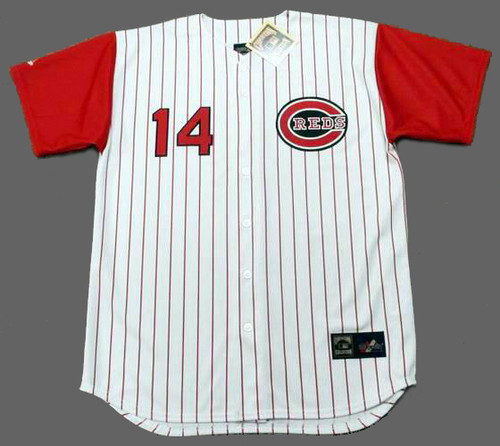 Team Logo(s) Features:
- "Reds" embroidered crest is sewn on the front left chest of the jersey

If you’re a Cincinnati Reds fan, or even just a fan of baseball in general, you’ll recognize the name stitched on the back of a Pete Rose Jersey. Rose won 3 World Series titles ( two with the Reds and one with the Phillies), and helped create what became known as “The Big Red Machine” because of Cincinnati’s dominance. In addition to his 3 title rings, Rose stacked up three batting titles, an MVP award, two Gold Glove awards, and of course is the MLB all time hits leader finishing his career with 4,236. From his first season, for which he was named Rookie of the Year, Rose was practically unparalleled all across the diamond.

Following his storied career in Cincinnati, Pete Rose played 5 seasons for the Philadelphia Phillies from 1979-1983 winning a World Series title in 1980. In 1984 Rose signed with the Montreal Expos playing only 95 games before returning to the Reds that season as a player-manager, where he would finish out his career as a player before transitioning into a managerial role with the organization. Though ineligible for the Baseball hall of fame because of some tax disputes and illegal sports betting, Rose was inducted into the Cincinnati Reds Hall of Fame in 2016. Rose has come clean from his legal struggles, and is now a baseball commentator and analyst.

Despite his legacy being tainted somewhat by some ill-advised baseball betting, Rose remains one of the greatest to ever play the sport. On top of all his on-the field accomplishments, Pete Rose was actually born in Cincinnati, making him a hometown hero in the extreme. A Pete Rose jersey makes a great gift for yourself or a Cincinnati fan in your life, and is sure to be cherished.