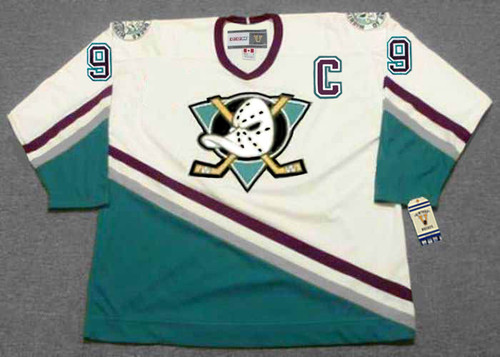 This Paul Kariya jersey is the same style jersey Kariya wore during the 2002-03 season, while leading the Anaheim Mighty Ducks to the Stanley Cup finals. Paul Kariya was drafted by the Anaheim Mighty Ducks in 1993 and quickly became one of the most talented and exciting players to watch in the NHL. In the 1994-95 season, he was named to the NHL All-Rookie Team. He was the captain of the Ducks for seven seasons. During his career, Paul Kariya also played for the Colorado Avalanche, Nashville Predators, St. Louis Blues, and the Canadian Olympic team.

Team Logo(s) Features:
- As with every CCM V550 model the "Mighty Ducks" front and shoulder embroidered crests are "Glued" on the jersey